When I started with a blog over here on Hashnode, my plan was to try and write something at least once a week. I managed to do that as far as January this year, give or take, but then things got a little busy, the world got trickier, and... Well, you don't need me to tell you about that. Anyway, I'm back to write some more and, hopefully, try and keep up with writing. I feel it'll do me good.

I have been busy since January. Work has, as far as possible, carried on as normal. The only big difference being I'm back working from home. It's an odd turn of events personally given that I'd worked from home for 21 years, then (with some trepidation) went back to working in an office. Having got used to being in an office and being around people, it took some adjusting to working alone again.

So, on to the main point of this post... During that period I've spent a lot more time at my machine than I would normally, and so it was inevitable that I'd end up tinkering with my Emacs configuration. While it's true that there's hardly a week goes by where I don't tinker with some small thing, I try not to make huge changes too often. Huge changes do happen though.

A handful of weeks back was another one of those times where I made a big change.

After I burnt my original ~/.emacs file back in 2016 I've had an approach where I've tried to make things as modular as possible, and as easy to clone down to a new machine as possible. The design I came up with, especially once I moved over to using use-package, has served me well. But there was always one thing that bothered me: the files that handled the loading and configuration of packages were, in effect, still three large monolithic files. While this was better than a single monolithic ~/.emacs, it still didn't feel quite right.

Giving it a bit of thought, I decided that what I really wanted was a single directory in which I could drop lots of small .el files that would handle the loading and configuration of all sorts of packages. While it didn't gain anything concrete, the idea felt tidier. Tidy is good. Feeling like the code smell is good, is good too.

First though I needed a way to load multiple files, ideally within a whole directory hierarchy, without needing to know in advance what files would be there. After a little bit of tinkering I settled on this bit of code that revolves around the use of directory-files-recursively:

Simply put, this code finds every file in and below ~/.emacs.d/init.d/packages.d/ whose name ends in .el (note the use of a regular expression, using rx to create it), removes the extension from the name, and loads it with load (dropping the extension means load can decide if it wants to load the compiled version of the code, or the source, depending on what's available).

After writing that I could then start to populate ~/.emacs.d/init.d/packages.d/ with lots of smaller files that handled the loading of packages. In some cases there's a file just for one package, in other cases there's a file that handles a logical grouping of packages (where there are obvious direct dependencies, or where one package is designed to extend the other, etc). For now I've decided to break things down into three directories that map to the three monolithic files I had before: 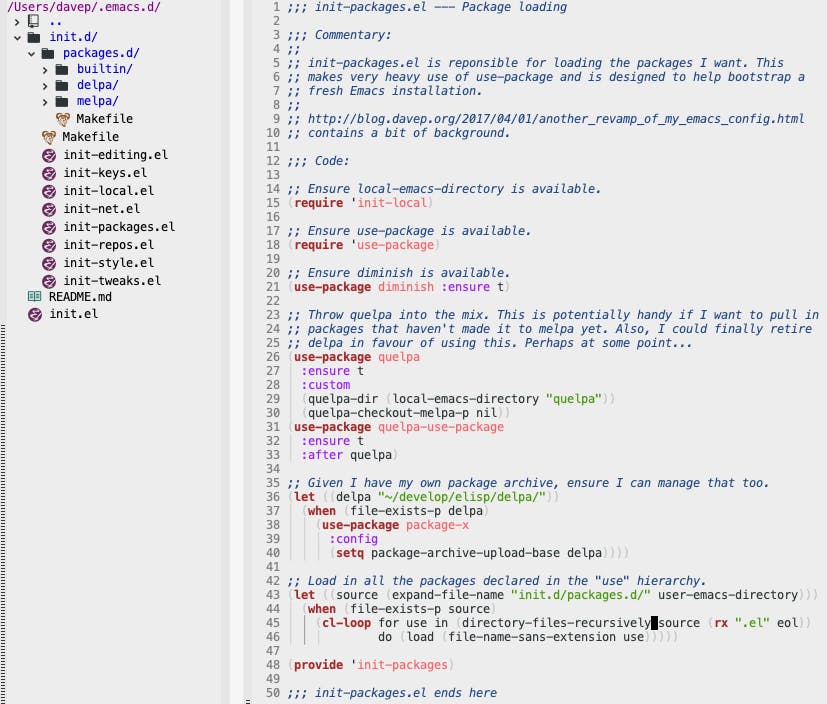 However, I'm not totally wedded to this design and I may change this as time goes on.

While I've not spent any time properly testing it out, I've also not really noticed any obvious impact on startup speed. However, this tends not to be a real concern for me. I seldom start Emacs anyway. I always have it running and use emacsclient as my editor in most places so files open instantly in the running version of Emacs.